Our normal theater and bar operations are Thursday to Sunday with doors opening 45 min before showtime. If we have a special event, such as a concert, doors may be adjusted by the promoter of the event. We may also open for special screenings and events other days of the week.  Please check our calendar for details.

The Texas Theatre is located at 231 W Jefferson Blvd, Dallas, TX 75208. We are along the historic Jefferson Blvd shopping district and 3 blocks from the Bishop Arts District in Oak Cliff. Get Driving Directions.

FREE Parking is available along Jefferson Blvd after 4pm (meters before 4pm are 25 cents/hour).

FREE Parking is available at the Texas Theatre lot adjacent to the Bank of Texas, at the corner of Madison Ave and Centre St.

The Texas Theatre was opened at 231 West Jefferson Boulevard with fanfare on San Jacinto Day, April 21, 1931. The Texas Theatre was the novelty of longtime Oak Cliff resident and entrepreneur, C. R. McHenry, better known in the community as “Uncle Mack.” McHenry’s dream was to build a theater with state-of-the-art projection and sound equipment. 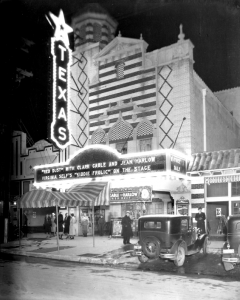 McHenry partnered with four Dallas-area businessmen to help him realize this dream: Harold B. Robb, E. H. Rowley, (Robb & Rowley Theatres) W. G. Underwood and David Bernbaum. Together they hired renowned architect W. Scott Dunne to design the Texas. He opted for a “Venetian” style, quite similar to his earlier Texas Theater in San Angelo. The design included opera boxes in the auditorium under a full night sky, fountains, projected clouds on the ceiling, and of course a giant chandelier. The completed theatre was the largest “suburban” movie house and the third-largest theatre in Dallas.

The Texas’ developers spared no expense and boasted that the theater was “fireproof” – constructed entirely of concrete. The theatre was the first in the area built for talking pictures and it featured the second-largest Barton organ in Dallas. However, McHenry was most proud of the cooling and ventilation system which blew 200,000 cubic feet of air per minute through a water-cooled system pumped from a 4,000-gallon tank. The cooling system made “The Texas” the first theater in Dallas with air conditioning. Billionaire film producer and renowned aviator Howard Hughes and his business partner Harold B. Franklin, another Hollywood producer, briefly owned the Robb & Rowley movie theater chain in the early 30′s during construction and opening of the Texas Theatre.

On November 22, 1963 at approximately 1:45 p.m., nearly 15 Dallas police officers converged on the Texas Theatre in search of a man who had entered without paying. That man was Lee Harvey Oswald – murder suspect in the slaying of Officer J.D. Tippit and later President John F. Kennedy’s accused lone assassin. He ducked into the theatre during an in-progress showing of War Is Hell and sat near the back of the auditorium. John Brewer, the manager of the shoe store a few doors east of the theatre, had seen him loitering suspiciously outside his store and had noticed he matched the description being broadcast over the radio of the man who had shot local beat officer – and off-duty Texas Theatre security guard – J. D. Tippit. Mr. Brewer stepped out of his store and saw Oswald enter the theatre; he alerted Mrs. Julia Postal, who worked in the box office. She called the police and Mr. Brewer stuck around to point Oswald out to the officers when they arrived.

As the Texas Theatre rocketed into the international spotlight, an urgency to hide, deny and destroy it tore its way through Dallas. Shortly thereafter—in what is coined locally among preservationists as the most comprehensive architectural cover-up of the Twentieth Century—the theater’s vibrant designs, false bridges, towers and campaniles, decorative wood railings, and star and cloud painted ceilings were sealed from public view under a Spanish-style stucco re-design. In approximately two months in early 1965, the theatre received a new, six-flags-of-Texas-themed façade, a new screen, and new upholstery in the auditorium. The front stairwell was turned 180 degrees, to prevent others from sneaking in without a ticket. The box office was moved inside the theatre – another local first. Amazingly, all of this work was carried out while the theatre was still open for business. (It did close for a few days after the project was completed – so they could hold a grand re-opening party.)

As technology in moving, talking, and color pictures progressed and drive-ins and multiplex cinema became the rave, the Texas Theatre’s patrons slowly moved on to other entertainment venues. United Artists closed the theater in 1989. In an attempt to save it, the Texas Theatre Historical Society (TTHS) bought the theater in 1990. Acknowledging its importance to the President’s assassination, TTHS allowed Oliver Stone to remodel the exterior façade for his 1990 film, JFK, to match that of 1963. However in 1992, the Society was no longer able to make the mortgage payments and the theater closed once more. Shortly thereafter, former usher and sign changer Don Dubois of Texas Rosewin-Midway Properties saved the theater from the wrecking ball. Nevertheless, two years later in 1995, it was nearly destroyed by a three-alarm fire, forcing the doors shut yet again.

In 1996, Pedro Villa rescued the theater from demolition when he learned of plans to convert it into a furniture warehouse. However, as Villa’s resources were exhausted and his pleas for investments went unheard, the theater defaulted back to Texas Rosewin-Midway Properties. The tattered and torn building remained vacant for three years, succumbing to vandals, stray animals, and hostile weather.

In 2001 the 501 3c The Oak Cliff Foundation purchased the building and began looking for a new permanent tenant. Several areas of the building were renovated and upgraded by the OCF. The Texas Theatre was added to the National Register of Historic Places in 2003.

In 2009 Jason Reimer was invited to join the OCF as the creative director by then chairmen Stuart Sikes. After rebranding and holding a series of curated free screenings, Reimer was approached by Barak Epstein with a plan to reopen the theater into a fully functional cinema and events center. Epstein collected filmmaker Eric Steele and founded “Aviation Cinemas” (a nod to Hughes) with Reimer transitioning to join the group. The new operations began via a grand re-opening in the fall of 2010.  In 2019, The Aviation team acquired the property from the Oak Cliff Foundation in order to continue to restore and update the theatre.

in 2021, Aviation Cinemas completed a $2 million dollar expansion of the theater via a new upstairs second cinema, new seating area in the balcony and a new upstairs full bar. The new upstairs cinema can seat 165 patrons, offers 35mm and Digital Cinema projection, state of the art surround sound and is fully ADA compliant with a chair lift and elevator access, as well as hearing and visual impaired device assistance. The new capacity of the main auditorium was increased to 670.